A healthy lifestyle, diet, and exercise can make a difference in how you look and feel. Yet for some people even obsessive dieting fails to remove fat from some areas of their bodies. In women, this resistant fat is usually found in the neck, hips, buttocks and outer thighs (saddlebags). With men it tends to occur in the neck, abdomen and sides of the waist (love handles). For all these areas, liposuction can be the answer to the previously insoluble question of how to lose fat that just won’t go away.

Liposuction can remove fat cells from the body and may be used alone or in conjunction with other procedures, such as a face lift, or a chin implant, or a tummy tuck. It is designed for those who have specific areas of localized fat deposits and who have unsuccessfully tried to eliminate them through diet, exercise and weight loss. It is not a tool analogous to a human lathe that is able to circumferentially sculpt layers of fat and successfully treat generalized obesity. Liposuction can be performed on an outpatient basis under local or general anesthesia.

Very small incisions are made near the site where the fat deposits are to be removed. The fat is then loosened from surrounding tissue and removed. The procedure can last from thirty minutes to several hours depending upon the extent of surgery.

Patients need to be carefully monitored and receive intravenous fluids during and immediately following surgery. Fluid is lost along with the fat, so it is important that this fluid be replaced during the procedure. After the incisions have been closed, a compression dressing or bandage is applied to the area to prevent bleeding, reduce swelling and support the affected areas.

The basic technique of liposuction is used in all patients. However, as the procedure has been developed and refined, several variations have been introduced.

The tumescent technique is where a mixture of saline, lidocaine (a local anesthetic), and epinephrine (a drug that contracts blood vessels),is injected into fatty areas before the fat is removed. This fluid helps the fat be removed more easily, reduces blood loss and provides anesthesia during and after surgery.

Ultrasound-Assisted Lipoplasty (UAL) uses ultrasonic energy to dissolve the fat. As it passes through the areas of fat, the energy explodes the walls of the fat cells, liquefying the fat, which is then removed more easily than with the traditional liposuction technique.

SAFE stands for separation, aspiration, and fat equalization. We use this technique in most body contouring patients. It has resulted in a smoother appearance and better outcomes.

The dressing remains in place for seven to 10 days depending upon the extent of the surgery and the individual’s healing process. A surgical compression garment is also usually worn for two to four weeks when support is needed. Pain is minimal to moderate and can be controlled with oral medication. Antibiotics may be prescribed to prevent the likelihood of an infection. You should be back at work within a few days following surgery.

Risks increase when a great number of areas are treated at the same time, or if the operative sites are larger in size. The scars from liposuction are small and strategically placed so as to be relatively inconspicuous. However, minor imperfections in the final appearance are not uncommon after lipoplasty. The skin surface may feel irregular, and excess skin may result, especially in older patients. Numbness and pigmentation changes, which are usually temporary, may also occur. 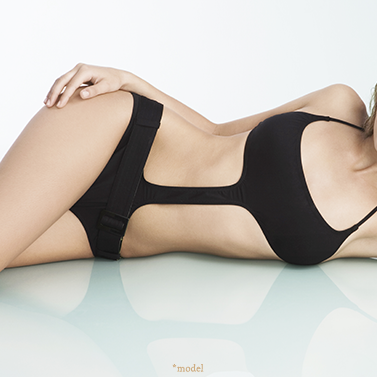 “I am a perfectionist and everything about Dr. Grotting’s office, staff, care and of course, Dr. Grotting was PERFECT!”
» Read more Testimonials